Contributor
On the Road

On the 8th of December, Blue-Cloud stakeholders gathered in Brussels for the final conference, welcoming representatives from the European Parliament, the European Commission, the EOSC, the EU Digital Twin of the Ocean initiatives, researchers and end users from the marine research community.
Sara Pittonet Gaiarin and Sara Pittonet Gaiarin
2 contributors
Like Liked by Evelina Satkevic
0

At the Blue-Cloud Final Conference we explored key achievements and the road ahead for this exciting Horizon 2020 journey in Open Science for the ocean, also presenting the Horizon Europe project ensuring follow-up of results until 2026.

On the 8th of December, Blue-Cloud stakeholders gathered in Brussels for the final conference organised at the beautiful Residence Palace, welcoming representatives from the European Parliament, the European Commission DG RTD, the EOSC governance, the EU Digital Twin of the Ocean initiatives as well as researchers and end users from the European marine research community. The event provided the perfect opportunity to learn about the main achievements and the road ahead of this key component of the EU “Future of Seas and Oceans Flagship Initiative” and to officially introduce the new project that will ensure follow-up of Blue-Cloud achievements until 2026.

“Europe is a key player in the world for what concerns open science and open access to data.”

The event was opened by Pierre Karleskind, Member of the European Parliament, chair of the Fisheries Committee and VP Marine and Maritime Research for SEARICA Intergroup, but also a former oceanographer.

“With our colleagues in the EU Parliament groups we are involved in international negotiations supporting the position of the EU on the status of the ocean. We are working to have it written on international conventions that the Ocean is a common resource for humanity. We need to be sure that the ocean is shared and managed sustainably. To do so, we need free access, common access to ocean data and resources, and this is what you are doing, this is why your project is so important. Thank you very much for your good work in this direction”.

Nicolas Segebarth, Policy Officer of Blue-Cloud, brought to the event the words of the European Commission DG RTD.

“Blue-Cloud is the flagship project that paved the way for many major net innovations in the realm of Ocean knowledge and digital twins. Blue-Cloud is an example for open science across borders and across disciplines. Blue-Cloud is also perfectly positioned in the EU Missions, namely the Mission to Restore our Ocean and Waters by 2030.- I believe that the potential of the EU Digital Twin of the Ocean as a main deliverable in the knowledge system can be seen today thanks to the great work of Blue-Cloud and its demonstrators which can be considered precursors of the DTO”

Blue-Cloud has achieved significant results since the start of the project in October 2019. The Blue-Cloud Open Science platform introduced a “de facto” federation taking place at 3 levels: the data, the computing resources and the analytical services. For each of them Blue-Cloud orchestrated mechanisms that successfully established interoperability and resulted in a Data Discovery and Access Service, the Virtual Research Environment and five Virtual Laboratories. Blue-Cloud working environments are serving more than 1,300 users in total spread across 20 countries. 15 services released by Blue-Cloud are now available in the EOSC Marketplace. Up to mid of September 2022, more than 25,700 working sessions were executed, with an average of 1,286 working sessions per month and an average of 55 working analytics sessions executed every month by the users of the VLabs.

The results produced by the different Virtual Labs exploiting Blue-Cloud’s Open Science framework  and services were at the core of the first session, chaired by Dick Schaap, Technical Coordinator of Blue-Cloud and prime mover of its innovative Data Discovery and Access Service, enabling the retrieval of 10 Million datasets and data products into the Blue-Cloud collaborative environment. Patricia Cabrera, VLIZ, Jean-Olivier Irisson, OBS-VLFR, Massimiliano Drudi, CMCC, Anton Ellenbroek, FAO guided the audience through the five Blue-Cloud demonstrators and the results they produced in different fields of marine research, ranging from biodiversity to environmental science, as well as fisheries and aquaculture.

“An Open Science framework such as Blue-Cloud also enables non-programming experts to reuse and reproduce methods, as we have also seen in the Blue-Cloud Hackahton.” Patricia Martin-Cabrera, VLIZ

“The Blue-Cloud VRE is one place to perform data discovery and access, to store, share and preserve any of your research products, and clearly also to execute analyses and processes. [...] It’s a way to deliver what scientists need and enable collaboration, sharing, reuse and reproducibility.”

Blue-Cloud has established concrete synergies with E-infrastructures, Blue Data Infrastructures, and EU-funded projects in the Open Science, Blue Economy and Marine Research fields. A panel discussion reflected on the lessons learned from the Blue-Cloud pilot and brought the perspective and experiences of other marine projects and related initiatives towards aligning future actions in support of growing a thriving marine thematic community within EOSC.

“We use the same terminology in Blue-Cloud and EOSC, also in terms of future steps to 2026, the main difference is the scale. We see EOSC as a transversal Data Space that can feed the sectoral ones. There might be a gain for economies of scale in common services that do not need to be funded individually for each infrastructure.” Michel Schouppe, DG Research Policy Officer

“We believe that through collaboration and cooperation with initiatives operating in the same field, the value of Blue-Cloud services increases - said Sara Pittonet - At the final event we had the pleasure to listen to many different actors who contributed to make Blue-Cloud a success - from the core team behind the Blue-Cloud platform up to some of our end users - but also actors that represent the future and way forward for the exploitation of what Blue-Cloud has built so far”.

How can Blue-Cloud contribute to a digital marine knowledge system to support the EU Green Deal & UN Agenda 2030?

Copernicus Marine Service, EDITO-Infra, ILIAD, the GREAT project, JERICO e-Infrastructure, the Ocean Best Practices System and international organisations such as FAO: the realisation of the objectives set by the EU Green Deal and the Sustainable Development Goals of the UN rely on a number of initiatives, such as those listed above, that all together will build an EU marine digital knowledge system and will provide researchers and decision makers with instruments, data and capacities to take informed decisions.

The Final conference was also the perfect scene to launch The Blue-Cloud Roadmap, which designs Strategic Goals and a comprehensive Action Plan to drive future developments towards delivering Blue-Cloud’s Mission 2030, working around 5 strategic paths of action. Julia Vera, Seascape Belgium, presented the Blue-Cloud roadmap, which has been co-designed with the wider marine and ICT community via extensive stakeholder consultations, workshops, online surveys, targeted interviews, and open feedback sessions. The Roadmap executive summary is available on Zenodo at https://doi.org/10.5281/zenodo.7377985

The event was closed with the official announcement of the start of the follow-up Horizon Europe project Blue-Cloud 2026 in January 2023. The new initiative will continue the work set by Blue-Cloud by adding more data providers, expanding the number of scientific demonstrators, introducing new analytical services and data products, and launching a Training Academy to boost knowledge sharing and ocean literacy across researchers working in the open science and Digital Twin of the Ocean landscapes.

“This event helped bring together the Open Science world and the ocean world, [...] showing that everybody has their place if these initiatives collaborate. We need to ensure that the science is transferred into operations [...] for the people dealing with fisheries, coastal resilience, and other fields. The endgame is to provide the answers to the problems of today and tomorrow.”  Nicolas Segebarth, Policy Officer of Blue-Cloud

Enjoy some highlights from the Final Conference! Watch the video

Blue-Cloud Final event took place on the 8th of December 2022, at The Residence Palace, Rue de la Loi, 155 · Wetstraat, 155, Brussels (Belgium). The recordings of the event and the slides presented are available on the event page

The Blue-Cloud consortium brings together leading, European, marine-data infrastructures and EOSC horizontal e-infrastructures. The project is coordinated by Trust-IT and technically coordinated by MARIS. An influential External Stakeholders Experts Board & an Expert Foresight Group supports the project. 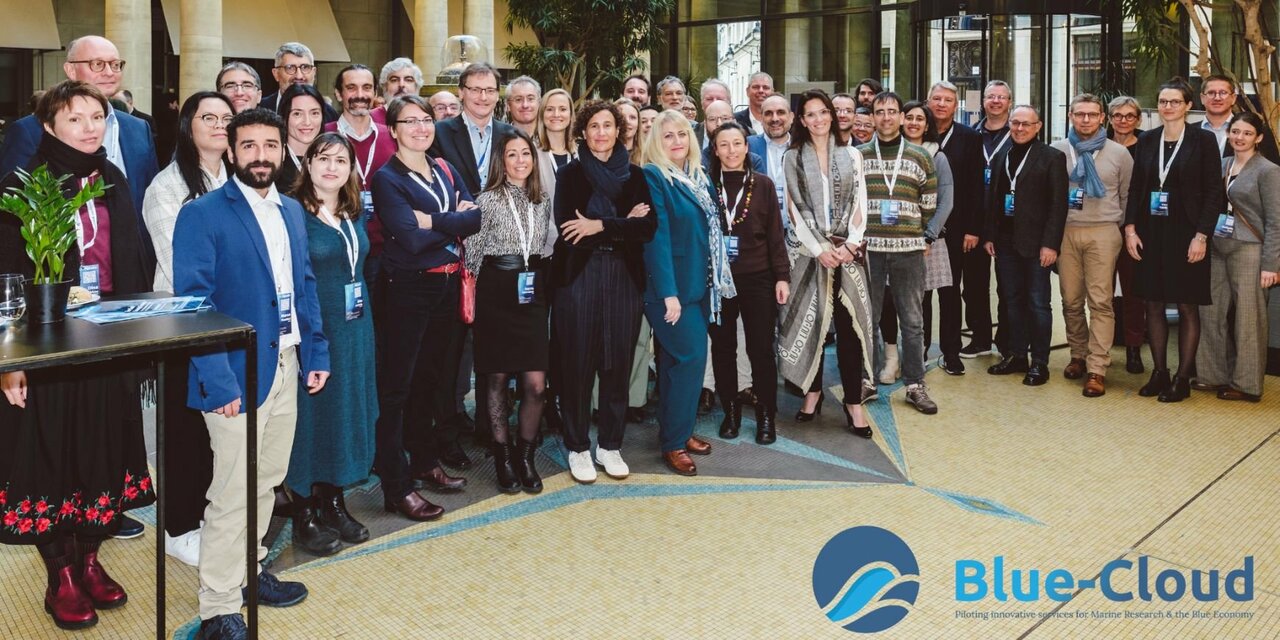 On the 8th of December, Blue-Cloud stakeholders gathered in Brussels for the final conference, welcoming representatives from the European Parliament, the European Commission, the EOSC, the EU Digital Twin of the Ocean initiatives, researchers and end users from the marine research community.