We created a multi-modal high temporal-resolution dataset giving insights into the different levels of conscious central and autonomic neural activity in a large mammalian organism and the effect of stroke on this complex activity.
Martin Frasch, Martin Frasch & Reinhard Bauer
3 contributors
Like

Brain injuries and ensuing neurological abnormalities due to chronic hypoxia are among the most frequent causes and difficult to detect reliably. Prevention strategies require novel accurate methods. We showed that electrocorticogram’s mutual information properties (ECoG) contain information about c…

One of the oldest questions on the interface between philosophy and science is what gives rise to consciousness. Its practical application has been sought in the art and science of sedating animals and humans to knock out pain and memory for the reasons of performing a painful procedure or to preserve the brain when it is hurt and needs time to recover (aka, induced coma). Can we see consistent brain regional and temporal patterns of electrical activity corresponding to the different types and depths of sedation as a simplified version of graded levels of consciousness? Equipped with this understanding, can we discern low-voltage brain electrical activity, electroencephalogram (EEG) from isoelectricity, the ominous pattern of a fatally injured brain that won’t recover?

It is on this interface of philosophical and practical questions that our team seized the opportunity to gauge the brain’s electrical activity on different levels and under different conditions of sedation and injury in one of the most established models of human physiology, the domestic pig, Sus scrofa. We wanted to create a dataset that was as complete as possible to characterize the central nervous system’s activity (cortical and thalamic neural activity) as well as the autonomic nervous system’s and cardiovascular activities, the cardiac and cerebral blood flows, all measured at the same time.

In the following, we delve a little deeper into the story behind the dataset.

Surface EEG contains information about corticothalamic communication, seen as a neural substrate of conscious activity, which can be quantified even without invasive insertion of thalamic electrodes. In this study, we demonstrate the basic stereotaxic approach to chronically recording electrothalamogram (EThG) and quantifying the effects of isoflurane and fentanyl sedation on the brain electrical activity from a ten-channel electrocorticogram (ECoG, the research-grade equivalent of EEG), EThG, and the cerebral blood flow, followed by the characterization of the effects of gradual propofol sedation on these parameters.

The resulting dataset offers an integrated picture of activities of two representative thalamic nuclei and the ten-channel cerebral cortex field potentials, all sampled at 2000 Hz. One of the thalamic nuclei, the reticular thalamic nucleus (RTN), stands as an example for the thalamus’ unspecific nuclei, referred to as the gate to consciousness, uniquely composed of GABA A positive neurons responding to propofol; another, laterodorsal nucleus (LD), represents an example of thalamus’ specific nuclei processing visceral inputs headed to the cortex. This all is accompanied, for the first time, by simultaneous recordings of the electrocardiogram (ECG), arterial, central venous blood, and intracranial pressure signals and intermittent cardiac output and regional cerebral blood flow measurements.

For thalamocortical and cortico-cortical communication, sedation-dependent linear and nonlinear coupling dynamics have been reported, but not yet characterized under conditions of gradual ischemia as a potential biomarker of brain sedation state and recovery. Studies in rats have shown that global brain hypoxia-ischemia affects long-term information processing in thalamic circuitry and the transfer of sensory information in thalamocortical networks. Newborn mice exposed to ischemic insult also suffer from the increased vulnerability of thalamocortical circuitry.

However, there is less data on thalamocortical responses to ischemia from larger mammals with stronger resemblance of brain maturity, developmental profile, and injury patterns, such as sheep or pig. The present dataset helps to close this data gap. The combination of propofol sedation with subsequent ischemia data from ECoG and EThG, including RTN, yields a rich dataset to study patterns of thalamocortical communication under conditions of sedation, ischemia, and recovery.

Of note, we focus on the spontaneous ECoG/EThG activity and exclude the evoked potential responses from this dataset. We believe this makes for a focused presentation of this complex multimodal recording series and will present the evoked potentials dataset separately.

As mentioned, the present dataset has been acquired at a 2,000 Hz sampling rate. This is making the data amenable to studies of the properties of high-frequency oscillations under conditions of various sedation regimes, gradual ischemia, and recovery periods. Of great interest, thanks to EThG recordings, it may be possible to relate the ECoG patterns of spontaneous high-frequency oscillations to their thalamic contributions in EThG.

Finally, the simultaneous availability of the cardiovascular and brain electrical data lends itself to studying joint dynamics of, for example, ECG and ECoG or EThG. The relationships between these time series have been reported, sporadically, but much remains to be done to establish the physiological framework for these relations and to explore the biomarker potential of such multivariate EEG - ECG analyses. We leave this exciting direction of research to future studies using this data set.

We hope that this dataset will spawn new applied theoretical and experimental preclinical studies testing models of consciousness, sedation, and ischemic brain injury derived from physics and complexity science, such as the recent work by Muñoz et al. (doi:10.1103/PhysRevResearch.2.023219).

The data descriptor can be found here. 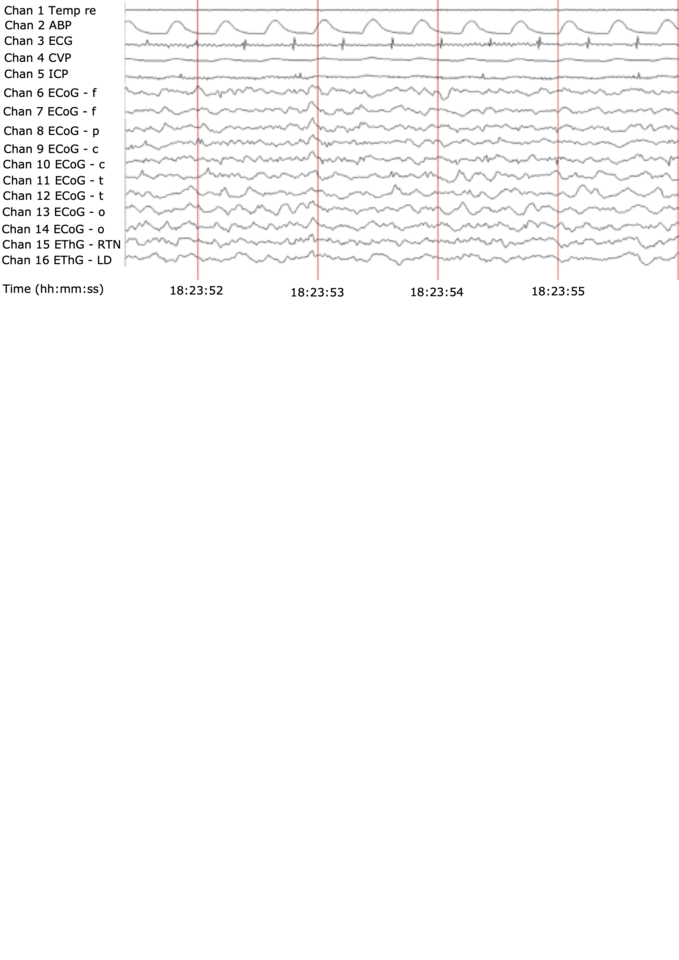 We created a multi-modal high temporal-resolution dataset giving insights into the different levels of conscious central and autonomic neural activity in a large mammalian organism and the effect of stroke on this complex activity.