Long-term monitoring data of individuals living in the wild represents the gold standard for research in animal ecology ­because subjects are sampled repeatedly over multiple stages of their life-history while being exposed to the natural evolutionary pressures of their native environments. Such data have offered evolutionary ecologists and conservation biologists valuable insights into the processes that affect species over multiple generations such as, for example, the role of stochastic climate events shaping the beak morphologies of Darwin’s Finches, the predator-prey cycles of mammal communities on the Serengeti, or the population dynamics of alpine plants and animals in response to climate change. However, collecting field data over many consecutive years while following standardized methods requires substantial labour and consistent funding. Due to these challenges, raw long-term field data from wild populations are rarely made open to the public – thus limiting the transparency and reproducibility of published research methods and results in evolutionary ecology. Furthermore, releasing raw data to the public has the potential benefit of stimulating more substantive discussion and criticism within the scientific community, which can advance research topics and forge productive collaborations. Here, my coauthors and I proudly offer an open access database of our raw field observations over an 11-year period of 1,647 uniquely marked individuals from an important breeding population of snowy plovers (Charadrius nivosus) in Mexico (Fig. 1).

Charadrius plovers are small ground-nesting shorebirds that occur worldwide. As a group, plovers present a model system for investigating fundamental and applied topics in organismal biology as they occupy open habitats that are easy to monitor and experimentally manipulate, and they exhibit intra- and interspecific variation in several behavioural, ecological, and demographic traits. For example, plovers display remarkable diversity and flexibility in breeding tactics with sex roles during courtship, mating, and parental care varying appreciably among populations both between and within species. The snowy plover is native to North America and is one of the least abundant shorebirds on the continent (estimated population size: 25,869) with many populations in decline and requiring intensive management. Apart from being a public icon of avian conservation, snowy plovers have also increasingly captured the spotlight for their intriguing ecology and life-history. Their unusual biology features a rare breeding behaviour characterized by highly dispersive polyandry and male-biased uniparental care.

In our newly published contribution to Scientific Data, we present ‘CeutaOPEN’ – an open-access database containing the raw data from our fieldwork between 2006 and 2016 monitoring a breeding population of snowy plovers at Bahía de Ceuta, a subtropical lagoon on the coastal plain of north-western Mexico (23°54′ N, 106°57′ W). The database includes individual-based observations of reproductive effort, movements, morphometrics, and social behaviour (Fig. 2). Previously, we have used subsets of these data to report on a wide variety of topics in organismal biology, including sex ratio variation, population viability, courtship behaviour, incubation behaviour, parental care, ontogeny, chronobiology, camouflage mechanisms, offspring desertion, and mating system dynamics.

The motivation for making our database open is to provide evolutionary ecologists and conservation biologists with an accessible resource that will serve as an important repository for addressing overarching questions in organismal biology and conservation. In our publication we describe our field methods for collecting the observations presented in the database, we summarize the contents of the database, and we provide a code-based tutorial demonstrating how to import, query, and utilize the database within the open-source R environment (Fig 3). We eagerly look forward to the next wave of plover science produced by 'CeutaOPEN' users – have fun plover-lovers! 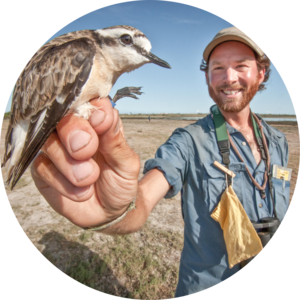