A new high resolution coastal sea level product from 2002 to 2018 is now available. The latest research of the Climate Change Initiative Coastal Sea Level Team on coastal altimetry has just been published with SpringerNature in Scientific Data. Read here: https://rdcu.be/b8LAq
Yvan GOUZENES
Engineer, LEGOS
Follow
Like Be the first to like this
0

With extreme events, sea level rise is generally considered as a major threat of current global warming in the highly populated low-lying coastal zones of the world (10% of the world population at less than 10 m above sea level). In these regions, human beings are exposed to a variety of natural hazards (e.g., damaging cyclones, storm surges and associated inundations, tsunamis, river floods), as well as to effects of global climate change (e.g., sea level rise) and direct human activities (e.g., urbanisation, sand, ground-water and oil extraction, land use change, etc.). Sea level rise increases the risk of flooding during extreme events, causing shoreline retreat and erosion, and also leads on the long term to permanent flooding and saltwater intrusion on flat coastal land and aquifers on which people depend for agriculture and water resources. Land subsidence, caused by groundwater extraction in many coastal megacities, amplifies the negative impacts of climate-related sea level rise since what ultimately counts for the populations and the environment is sea level rise relative to the ground.

Since the early 1990s, satellite altimetry provides invaluable observations of the global mean sea level and its regional variability. This data set has generated an abundant literature on the processes causing global and regional sea level change, as well as on closure of the sea level budget. However, sea level changes at the coast remain poorly known. Coastal zones are indeed highly under-sampled by tide gauges and currently un-surveyed (within 10-15 kilometres to the coast) by conventional altimetry missions because of land contamination on the radar signal. In addition to the global mean rise and superimposed regional trends, changes in small-scale processes such as local atmospheric effects, baroclinic instabilities, coastal trapped waves, trends in shelf currents and waves, freshwater input from rivers in estuaries, can substantially modify the rate of sea level change at the coast compared to open ocean regions. Because of the lack of systematic coastal sea level observations along most of the world coastlines, the question: “Is coastal sea level rising at the same rate as open ocean sea level?” has remained so far unanswered. Because of crucial importance for adaptation purposes and associated socio-economic issues, measuring and understanding present-day sea level changes along the world coastlines is obviously an objective of major importance.

In the context of the Climate Change Initiative (CCI) Sea Level Project of the European Space Agency (ESA), we have created a novel altimetry-based coastal sea level data set consisting of high-resolution (~300 m) monthly sea level data along the satellite tracks, at

distances of less than 3-4 km from the coastlines in general, sometimes even closer, within 1-2 km from the coast. This data set is based on a complete reprocessing of raw radar altimetry waveforms (a process called ‘retracking’) from the Jason-1, Jason-2 and Jason-3 missions. The data set also provides coastal sea level trends over 2002-2018 at 429 coastal sites located in six regions (Northeast Atlantic, Mediterranean Sea, West Africa, North Indian Ocean, Southeast Asia and Australia). These coastal sea level trends show no significant difference (within +/-1 mm/yr) with open ocean trends for 80% of the studied sites; a totally unexpected result considering the theoretical predictions about the potential influence of small-scale coastal processes. However, this is not true everywhere. Indeed, at a few sites, we observe a larger sea level trend close to the coast than offshore, while in some other cases, a decrease in trend is observed as the distance to the coast decreases. Causes of such trend departures remain to be studied. 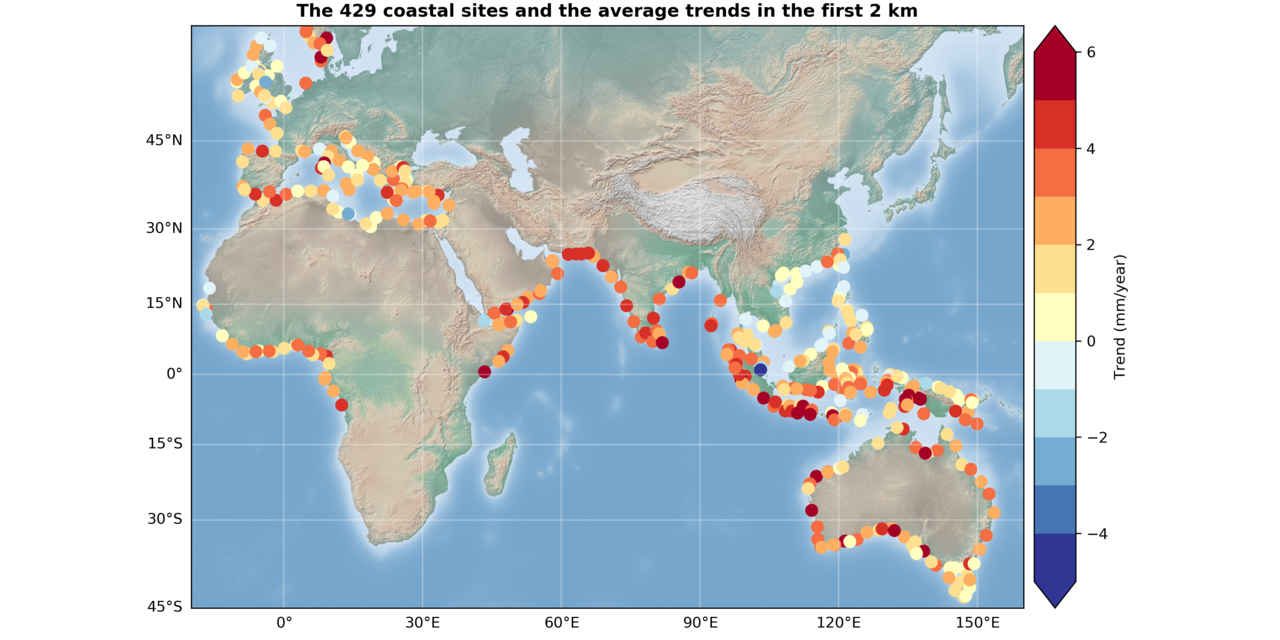 A new high resolution coastal sea level product from 2002 to 2018 is now available. The latest research of the Climate Change Initiative Coastal Sea Level Team on coastal altimetry has just been published with SpringerNature in Scientific Data. Read here: https://rdcu.be/b8LAq