Archaeologists use provenance studies to uncover the origin and the life-history of artefacts, including those that are sometimes found very far away from their source or place of manufacture. To this end, reliable archaeometric data facilitates the reconstruction of technological, economic, and social behaviors of human societies over many thousands of years. In the Pacific region, geochemical sourcing has been particularly successful at locating unambiguous sources of stone artefacts and tracing the transport of specific items across distant islands and archipelagos. Such material evidence of long-distance interisland voyaging shows that Pacific island societies were never completely isolated from one another. These patterns of interaction are central to our understanding of the deeply intertwined history of cultural systems in the Pacific.
Provenance studies are also instrumental in showing how specific high-quality resources, extracted and transformed in large scale quarries and workshops, were distributed among neighboring communities and through long-distance interisland exchange networks.

Adzes produced in the largest quarry complexes such as Mauna Kea on Hawai'i Island, Tatangamatau on Tutuila Island (American Sāmoa), or the ‘quarry-island’ of Eiao in the northern Marquesas (French Polynesia) were often transported to very distant places. The discovery of these tools far from their places of origin indicate long-term inter-archipelago interactions, as well as wealth economies and extensive political alliances in the highly hierarchical chiefdoms of Hawai'i, Tonga, and the Society Islands.

To facilitate access to this growing body of geochemical data, we conceived and designed Pofatu, the first open-access database of geochemical compositions and contextual information for archaeological sources and artefacts in a form readily accessible to the scientific community. Pofatu is an operational framework that enables data curation and data sharing in archaeometry, following the FAIR principles. The database also provides comprehensive methodological metadata (instrumental details, analytical procedures and reference standards used for calibration purposes or quality control) that ensure reproducibility and comparability between provenance studies.

The Pofatu Database currently contains 7759 individual samples from archaeological sites and geological sources across the Pacific Islands, but will grow as a large-scale collaborative project to include newly published datasets and cover more ground. Because Pofatu is open access, enables reproducibility, and facilitates reuse of existing data, it will be useful for crediting previous work while advancing future studies in archaeological sciences.

Although the Pofatu Database is meant to be used primarily by archaeologists, analyses of geological samples and raw material extracted from prehistoric quarries could also be used by geologists to gather essential information on the smaller or more remote Pacific islands, which are among the least studied places on the planet and sometimes lack geochemical documentation. In that sense, Pofatu is a tool that will also facilitate interdisciplinary research as part of a growing geoinformatics network.

New datasets and information on previously documented datasets can be submitted to pofatu@shh.mpg.de using the Data Submission Template and Guidelines. 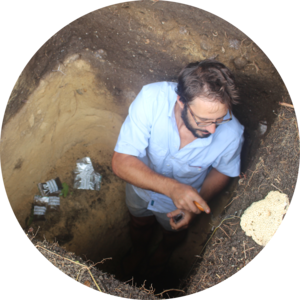 I am an archaeologist focusing on Pacific Island societies. I like to include different kinds of information in my research (material, linguistic, ethnographic) and my current projects involve studying the settlement history of Polynesia and the Polynesian Outliers, material cultures and technical traditions, and inter-island voyaging using geochemical sourcing.
Follow