Plants being sessile organisms have developed an array of strategies to evade the attackers. They produce toxic compounds or devise ways to block penetration, movement or multiplication of the attacker. But how these processes are accurately regulated, to ensure specificity of response, remains poorly understood. For example, plant response network when the invader is an insect pest, is completely different to the network after an infection of a tiny virus.

Sometimes an interactions between a plant and other organisms can turn into a kind of coexistence, where the attacking organism 'feeds' on the plant, but doesn’t cause any perceivable harm to the plant. This type of interaction, named mutual symbiosis or tolerance, puts less evolutionary pressure on the interacting organism, making it more durable.

Figure 2: Tolerant and diseased potato cultivars; symptoms visible on the leaves and the tubers.

This makes tolerant interactions interesting for agrobiotech applications, where the final vision is to produce crops less susceptible to pathogen attacks.

However, to transfer the knowledge to the field, we need to first understand molecular basis the interaction.

With our multiomics article, we provided novel data that was collected in order to describe the interaction of potato with its most devastating viral pathogen, Potato virus Y (PVY). To capture the interaction’s complexity fully, we measured the infection effects of viral multiplication on various levels, ranging from the overall phenotype and photosynthetic capacity to the level of small RNAs, transcripts and proteins. In addition, measurements were done across different time points of the infection, thus capturing the time scale as well. Our study provides multilevel insights into the fine-tuned and precisely regulated potato response to viral infection and contributes to general understanding of plant responses to pathogen attacks.

Figure: 3 Molecular network of plant defence response on the level of smallRNAs (left) and transcripts interacting with viral components (right). 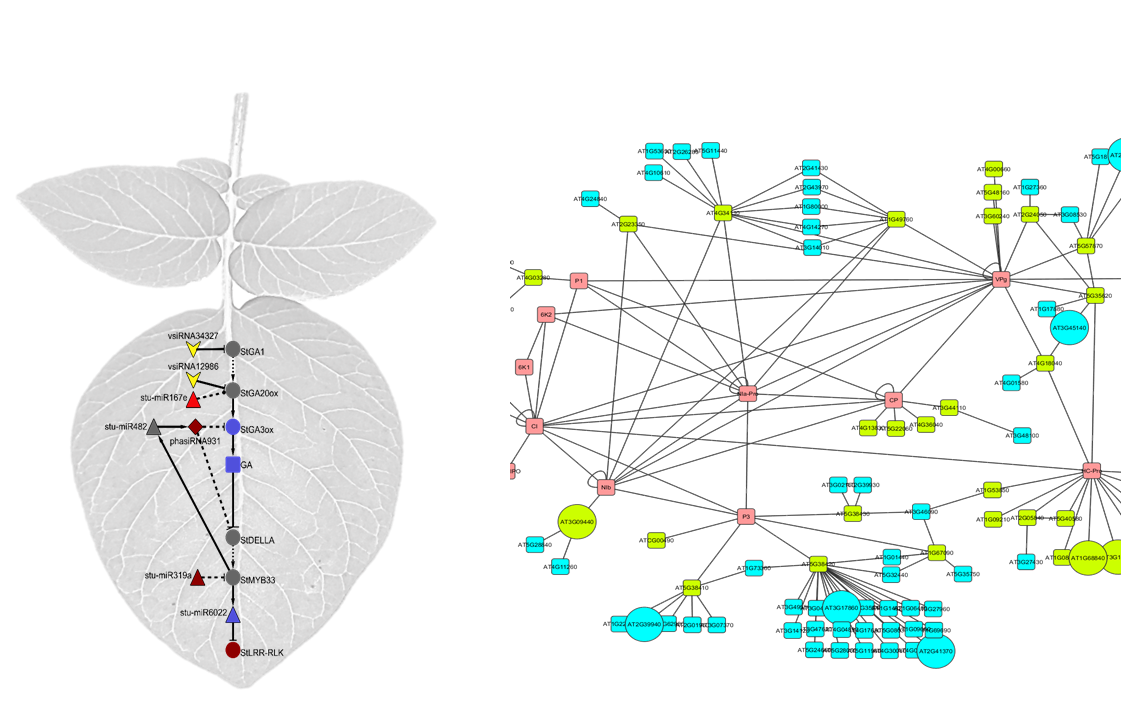