African landscapes would be incomplete without vultures. These enigmatic birds play a vital role in ecosystem health and hygiene services, but also possess significant spiritual, cultural and artistic value for Africans.
Sandi Willows-Munro
Researcher, University of KwaZulu-Natal
Follow
Like Be the first to like this
0

During the last decade, African vultures have experienced major reductions in distribution and population size and, as such, are considered conservation priorities. One important question, is what impact the reduction in population size has had on the genetic diversity of these magnificent birds. However, little is known about the population genetics of African vultures. Examining the spatial distribution of genetic diversity, within and among populations of these wide-ranging species, is also important because it is a key determinant of the long-term survival of these threatened species.

Southern Africa’s only endemic vulture, the Cape vulture, has undergone a significant reduction in range with recent surveys showing a drastic decline of the overall number of individuals in the wild. The extreme impacts of inadvertent poisoning, powerline collisions and habitat fragmentation have left Cape vulture populations decimated. The species is currently listed as Endangered on the International Union of Conservation of Nature (IUCN) red data list.

In our data descriptor, published in Nature’s Scientific Data, we present a public dataset of microsatellite genotypes of 605 Cape vultures drawn from across the southern African distribution of the species. This large data set represents an important baseline diversity estimate for future monitoring of the species. These data were analysed in a recent study “Low genetic diversity and shallow population structure in the endangered vulture, Gyps coprotheres” (Kleinhans & Willows-Munro, 2019) where we described the importance of genetic variation and connectivity in this endangered species by investigating the population genetics of the Cape vulture in South Africa.

With this study and these data we expect to bring awareness to the importance of genetic monitoring, evaluation and maintenance of genetic diversity of wild populations in future conservation initiatives of the endangered Cape vulture. 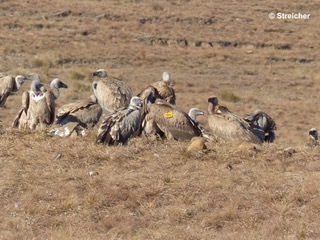 African landscapes would be incomplete without vultures. These enigmatic birds play a vital role in ecosystem health and hygiene services, but also possess significant spiritual, cultural and artistic value for Africans.